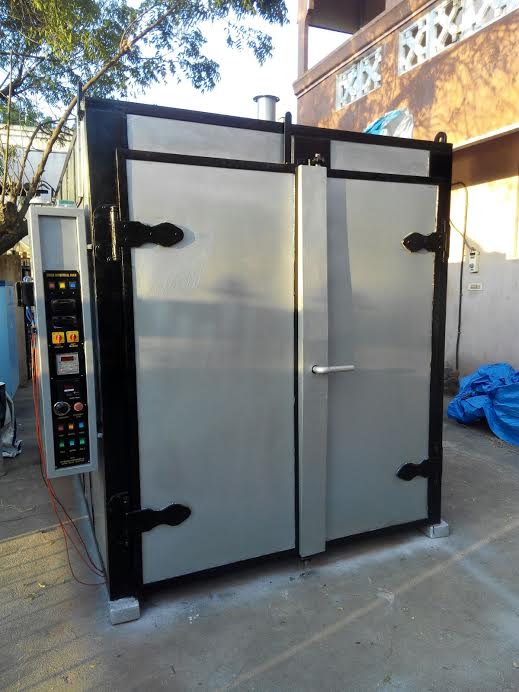 Construction:
The oven is triple walled construction with mild steel sheets and sections. A3” layer of glasswool insulation will be provided in between the first two walls to minimize heat loss. The oven bottom is suitably reinforced to take up heavy weight. The interior of the oven is finished with heat resistant aluminium paint while the exterior is of hammertone grey finish. Adjustable tras will be supplied extra.
The oven has two double walled well insulated doors at its vertical ends fitted with sturdy hinges. The doors will have asbestos gasket which will prevent excessive heat loss through front face of the oven.
Heating Element:
Heating is accomplished by the aid of Strip Heaters, made out of imported Nichrome wire which are fixed in between the two interior walls of the verticals sides. Facilities will be provided for easy replacement of heaters.
Air Circulation:
This is accomplished by a Centrifugal Fan driven by a powerful motor, which will circulate uniform temperature inside the chamber.
Temperature Reader:
One no. dial thermometer will be mounted on the side to indicate the correct temperature.
Control Gear:
Consists of one no. imported capillary thermostat for automatic temperature control, one no. heat control switch, three nos. Ammeter, one no. Voltmeter with selector switch, indicating lamps, air break magnetic contactor, On/Off switch for Fan Motor, fuses etc. which will be mounted one sheet cubicle and fitted on to one side of the oven itself.
Power Supply: 400/440 volts, 50c/s, three phase, AC mains, four wire system.
Safety Devices: The following safety devices will be incorporated in oven:
1. Auxillary thermostat, which will take charge incase of failure of main controller.
2. Door limit switch : To cut off power supply to the heaters while opening the door.
3. Inter lock arrangement: Between fan and heaters, will energise only when the fan is “ON”
Inner Chamber Size:

Sorry, no operators are currently available

Enter your info below to begin.